Behind the Headlines: The Internal Market Bill Explained 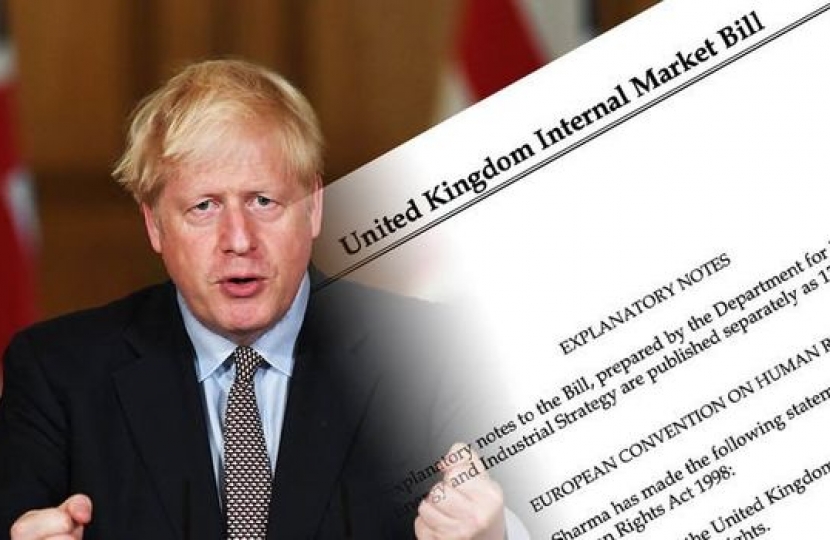 Our 24 hour ‘soundbite’ news culture doesn’t always allow for complex issues to be explored in the depth that’s required. This is certainly true of the coverage about the Internal Market Bill which is making its way through Parliament this week. I thought it would be helpful to set out some of the issues so you can make up your own mind.

What is the Northern Ireland Protocol?

You can read the full text of the NI Protocol here if you wish. At first glance, it all seems pretty straightforward:

In other words, nothing should be allowed to get in the way of normal trade.

Article 6 goes further, referring to the need for the EU and the UK to use their “best endeavours” to facilitate trade between Northern Ireland and other parts of the UK. In law, “best endeavours” is more than just doing your best to agree; it is an obligation for both sides to do all in their power to bring about an agreement.

Article 5 makes it clear that:

No customs duties shall be payable for a good brought into Northern Ireland from another part of the United Kingdom… unless that good is at risk of subsequently being moved into the [European] Union.

So what has gone wrong?

Last year’s negotiation of the Protocol dealt with the theory, but left the detail of what it meant in practice to be worked out by a Joint Committee by the end of this year. The ambiguities in the wording of the Protocol allowed both sides to claim the agreement was acceptable, but we are now coming up against the real and practical differences between the EU and the UK as we seek to reach agreement on the detail.

There are two key problems:

It remains the intention of the UK government to continue working through the Joint Committee in the hope an agreed resolution can be obtained. But if no such agreement can be reached, the government has an over-riding duty to ensure the unfettered movement of goods and services between all parts of the UK, and the Internal Market Bill is intended as a final backstop to protect our interests if all else fails.

The government has made it clear it will activate the dispute resolution process contained within the Withdrawal Agreement in parallel with the proposed legislation. But there is no guarantee either of these courses of action will succeed before 1st January 2021. This is why the government has added in the key power to be able to over-write the Withdrawal Agreement on this issue, should all other options fail.

I am delighted that the government has worked with its backbenchers to agree amendments to the Bill, and has agreed to table amendments requiring the House of Commons to vote before a Minister can use the key powers contained within the Bill. Once negotiations between the EU and UK are at an end, we will see clearly whether the EU has kept to its side of the agreement or not. If it has, we will have an agreed compromise. If it has not, it will have broken the terms of the NI Protocol and our course of action – and our international reputation – will be clear.

EU negotiators claim to be working to support peace in Northern Ireland, but risk it by using this issue as leverage in the negotiations. The government would be in breach of its obligation to govern were it not to act in order to prevent harm to the careful balance of powers in the Good Friday Agreement. Few MPs relish the prospect of Parliament legislating to allow a potential breach of international law in the future so I am pleased that the new amendment reserves that power until we can see if the EU has walked away from the NI Protocol itself.

Whilst we hope and work for the best, we must plan for the worst. To do otherwise would be irresponsible.

Supporting the Poppy Appeal and our Armed Forces Community

Due to Covid-19 restrictions, many volunteers have been unable to help with this year's Poppy Appeal and - like so many things - the Royal British Legion has had to adapt and create new ways for people to get a poppy.