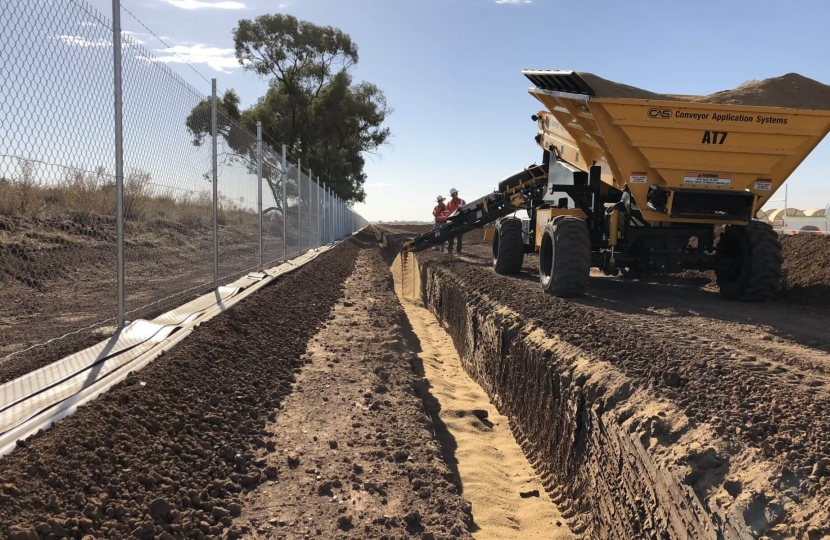 This week, I have written to residents of Cawston, following concerns about the proposals to dig trenches for offshore wind farm connectivity.

As you will know, a number of offshore wind farms have applied for permission to dig trenches through your parish in order to connect their offshore wind farm to the national transmission network. The planned routes of these trenches can be found here: https://www.nationalgrideso.com/ document/183031/download

Whilst we all agree that underground trenching is better than overhead electricity pylons, out of date competition rules mean that each wind farm is currently required to dig an individual connection trench rather than collaborate with others to minimise disruptive infrastructure.

Why do they have to connect to the transmission network in this way at all? With plans to build many more wind farms in the North Sea, surely it would be better to have a coordinated offshore transmission network (“OTN”), that reduces the need for this kind of community and environmental disturbance?

Ever since I was elected as your Member of Parliament, I have worked with Greg Peck, your District and County Councillor, and other Norfolk MPs, to get the Government to change these rules. After meetings with the Energy Minister, OFGEM, National Grid, Orsted, Vattenfall and Equinor, last July we were successful in persuading the Government to order a review of the current connection rules. I am delighted to say that this review has now recommended a wholesale change to government policy: instead of continuing with individual connections the Government has accepted that it should develop an offshore network into which new wind farms can easily connect. This plan reduces social and environmental impacts (especially here in Norfolk) and actually saves money as well!

The Prime Minister wrote to me last week to confirm that he recognises the need for an early change to the rules and that he will do what he can to speed the transition. During this period of transition the Government is encouraging all wind farm developers to share connection infrastructure on a voluntary basis.

Whilst I am delighted to have been able to help change the long-term approach, and whilst I recognise that much new infrastructure needs to be designed and built, I believe that the Government has not gone far enough. In particular:

Having feedback from you about the impact of the current plans will help our discussions with the wind farm companies. If you feel strongly on this subject please do contact Councillor Peck, or me, on cllr.greg.peck@broadland.gov.uk or Jerome.Mayhew.mp@parliament.uk. Whilst a degree of infrastructure work is, I fear, inevitable, we will continue to fight on your behalf to minimise the damage and help to create a better solution for Norfolk and the country. 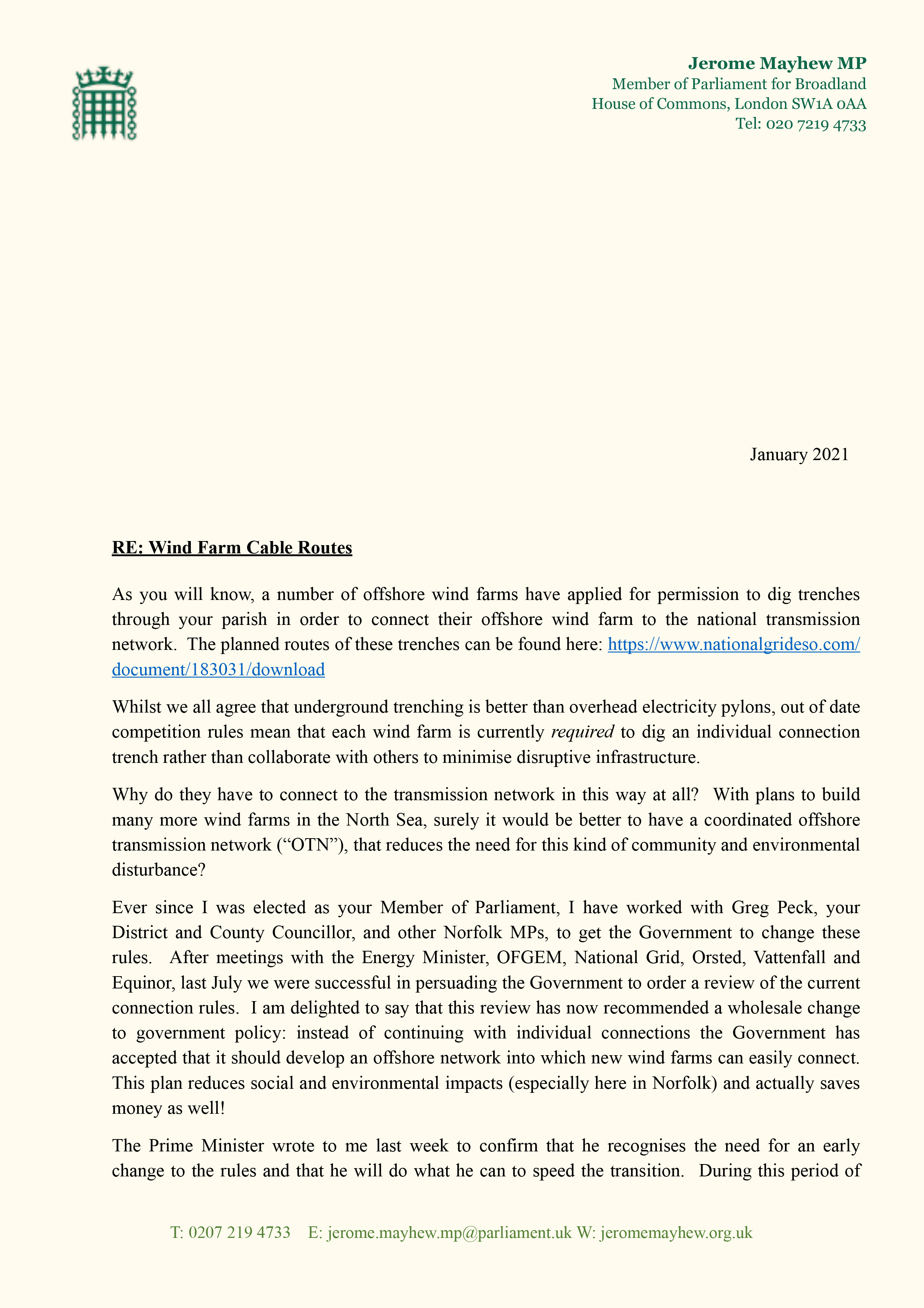 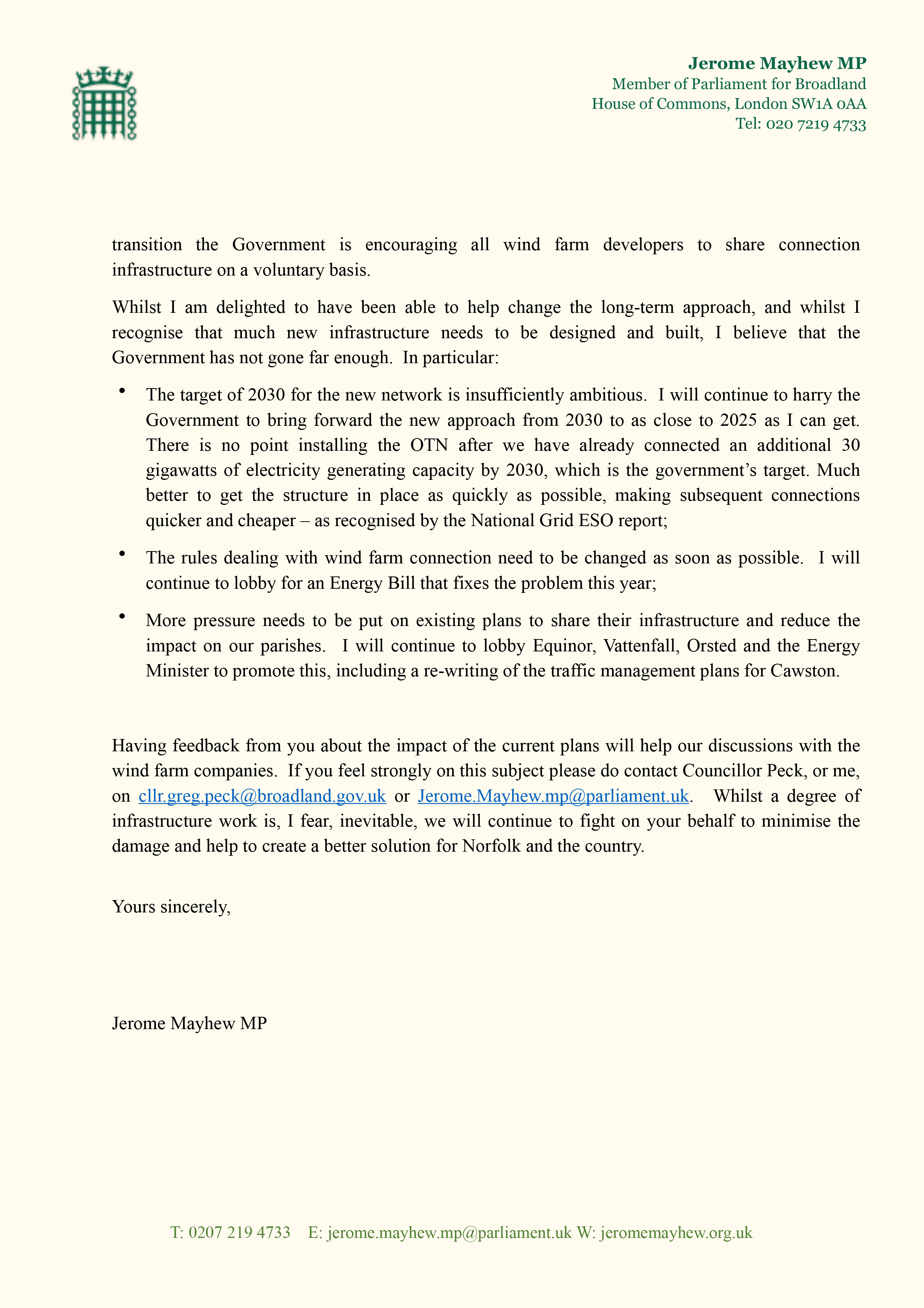 Today Jerome asked the Rt Hon Philip Dunn MP, about carbon border adjustments and the opportunities presented by the UK presidencies of the G7 and COP26 in the progress towards Net Zero.